Resa's Pieces, an inter-generational mix of musicians who want to "return to their roots" and play their long abandoned instruments again, needed to fill sections of Resa's Pieces that were missing players and to inform the community of its concerts. NewPath Consulting helped the leadership of Resa's Pieces understand the value of a high quality website.

The organization had just recently formed a not-for-profit corporation and decided to build a web site that would bring its culture and personality out of the rehearsal room and concert hall and onto the screens of online visitors from Toronto and around the world. Stories, pictures, and sounds would be gathered to give visitors a vivid sense of the organization, its repertoire, and its individual members. NewPath Consulting worked with the executive board to make this happen.

Starting in September 2008, NewPath Consulting and the Resa's Pieces leadership gathered and organized content, and planned a layout that would present the organization both as a group of dedicated musicians but also as one that knows how to enjoy itself and have a good laugh. A history of the organization was published online, documenting the organization's accomplishments and its growth into an independent ensemble. All these were combined into a web site that featured a way for interested musicians to sign up, keep in touch and also sell tickets and sponsorships to the Gala concert held each year in June.

By 2012,  the organization added 30 new musicians and sold over 800 concert tickets online. The popularity of the organization with the support of the website has attracted CBC Radio to produce and air a documentary on Resa's Pieces in July 2010.

By 2016, the organization has 150+ members and regularly sells over 2000 concert tickets online for 3 concerts every year. They also fundraise over $40,000 per year in sponsorship and ticket sales. 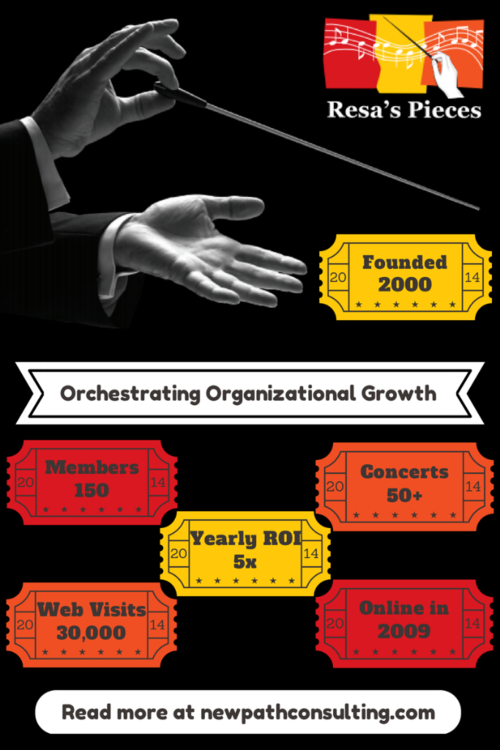 "Alex gives 100% and is attentive to every detail. He knows when to offer advice and when to sit back and listen. He understands the needs of his clients and seems to have endless amounts of patience."Ruth Fishman, past Executive Director Resa's Pieces

Get in touch and be a story