A short review of Scott Bradlee's "Outside the Jukebox"

In conversations with friends (and parents) I keep hearing an opinion that goes something like this: "Getting a liberal arts degree or going into the arts is a fool's errand. You're never going to make it!" Many people ardently live and die, probably from a fear of their lack of artistic or creative talent. So instead they push themselves and their kids headlong into a well-paying field like law, medicine or engineering. A field that pays the bills, you know?

In the book "Outside the Jukebox: How I Turned My Vintage Music Obsession Into My Dream Gig",  Scott Bradlee, creator of Postmodern Jukebox, turns the artist-as-bohemian on its head. He regularly drops stories that invert the opinion that being an artist is a surefire way to end up homeless or worse. Oh, and Scott ends up homeless more than one time along the way. Scott tells his story of being a pretty bad student, not wanting to learn the piano the classical way and struggling every bit along the way. And somehow he and his rag tag band of incredible singers, musicians and tap dancers end up touring the world making millions of fans (and dollars).

"Outside the Jukebox" is not a narrative about music or about Scott's superb arrangement and improvisational skills. It's not a "how to succeed in the music business" by any means. But it is a business treatise that can be summarized simply as "Be a producer, not just an artist. Today, that is imminently possible and profitable!" Along the way Scott shares gems of business and entrepreneurship wisdom that can't be ignored. The fact he is 30-something is surprising, too. One would think this sort of experience can come only from someone with decades of experience. Not so. After all, by Scott's own claims he is an "old soul."

Without further ado, here is a selection of excerpts I found considerably profound especially for the creative geniuses who are in ascension (or stuck in a rut). Think of the below as sort of a remix of the best riffs of Scott's wonderful book, that I recommend you run out and get today.

Go ahead and be impatient 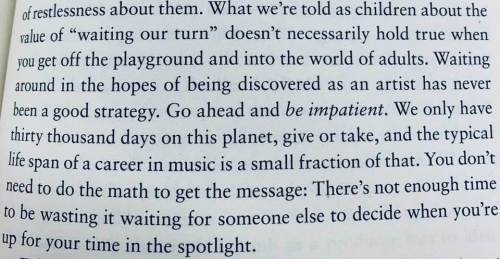 What we’re told as children about the value of “waiting our turn” doesn’t necessarily hold true when you get off the playground and into the world of adults. Waiting around in the hopes of being discovered as an artist has never been a good strategy. Go ahead and be impatient. We only have thirty thousand days on this planet, give or take, and the typical life span of a career in music is a small fraction of that. You don’t need to do the math to get the message: There’s not enough time to be wasting it waiting for someone else to decide when you're ready for your time in the spotlight. 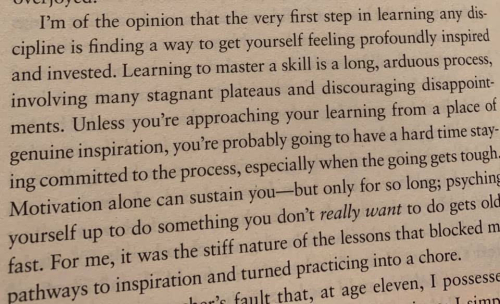 I'm of the opinion that the very first step in learning any discipline is finding a way to get yourself feeling profoundly inspired and invested. Learning to master a skill is a long, arduous process, involving many stagnant plateaus and discouraging disappointments. Unless you’re approaching your learning from a place of genuine inspiration, you’re probably going to have a hard time staying committed to the process, especially when the going gets tough. Motivation alone can sustain you—but only for so long; psyching yourself up to do something you don’t really want to do gets old fast. For me, it was the stiff nature of the lessons that blocked many pathways to inspiration and turned practicing into a chore.

Haters strengthen and mobilize your fan base 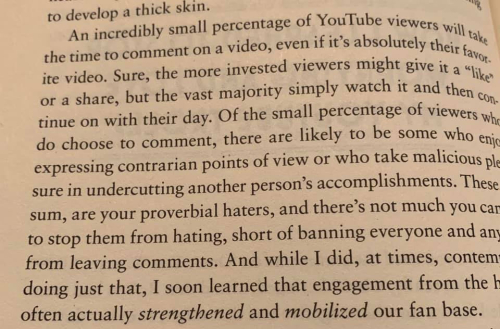 An incredibly small percentage of YouTube viewers will take the time to comment on a video, even if it's absolutely their favorite video. Sure, the more invested viewers might give it a "like" or a share, but the vast majority simply watch it and then continue on with their day. Of the small percentage of viewers who do choose to comment, there are likely to be some who enjoy expressing contrarian points of view or who take malicious pleasure in undercutting another person’s accomplishments. These in sum, are your proverbial haters, and there's not much you can do to stop them from hating, short of banning everyone and anyone from leaving comments. And while I did, at times, contemplate doing just that, I soon learned that engagement from the haters often actually strengthened and mobilized our fan base.

Mine is just one such story; every day, people around the world are making creative breakthroughs that change the way we live, listen, and learn. And although it may seem like these breakthroughs come about spontaneously, born from inspired bursts of clarity, the reality is that most of them make their way to the surface only after a series of disappointments, false starts, and spectacular failures.

Give others the space to be great

Part of leading well is being able to objectively evaluate the individual skills of your teammates and then guide them in a way that enables them to make the most significant contribution. You'll never be able to do this unless you’re willing to get out of the way and give others the space to be great.

What I discovered in the course of launching PMJ is that we're not intrigued by people who are simply trying to play a role but rather by people who are unapologetically authentic. It was not until I finally learned to embrace myself and the things that made me me that I experienced any level of success.

Where does freedom come from?

I'll leave you with a Postmodern Jukebox playlist called "Vintage While You Work: 12 Hours of Workday PMJ". Let us know if this is not the perfect way to whistle while you work. Enjoy.

This is only a preview. Your comment has not yet been posted.

The letters and numbers you entered did not match the image. Please try again.

As a final step before posting your comment, enter the letters and numbers you see in the image below. This prevents automated programs from posting comments.

Having trouble reading this image? View an alternate.